Layla has properly moved into her crib now. I should take her pack n play bassinet out of my and john’s room but I haven’t had the heart yet. I am mostly happy that she is in her crib because it means that she is sleeping so well, but there is still a little bit of sadness that she is just that little bit older already.

She is sleeping in her crib during naps (when we are at home and she’s not sleeping on the go, anyway) and at nighttime. I tried introducing an earlier bedtime (7-8) because she was sleeping so late in the mornings I thought she might need to be put down earlier, but that didn’t work. One thing that was hard for me to appreciate until I was a parent is that just like you can lead a horse to water but you can’t make it drink, it is hard to make a baby (or toddler, or anyone I suppose) sleep if they don’t want to. I can put her in her crib at 7 but even if I think she is tired she will cry. She is too young (in my book) to cry it out at this point, so the two times I have tried putting her down early I have ended up getting her as soon as she cries and bringing her back down to be with me and John until she falls asleep properly.

This morning when I went to get her she was 180 degrees turned around from how I had put her down. I was scratching my head in confusion because I hadn’t heard her rustling around overnight or in the morning and she was swaddled for goodness sake! I don’t know how she turned herself so much that her head was where her feet were when I laid her down, and vise versa. I would understand if she had been screaming her head off at some point (and thus wriggling her body around) or something but she never gave any indication of what she was up to! It did make us laugh, though. 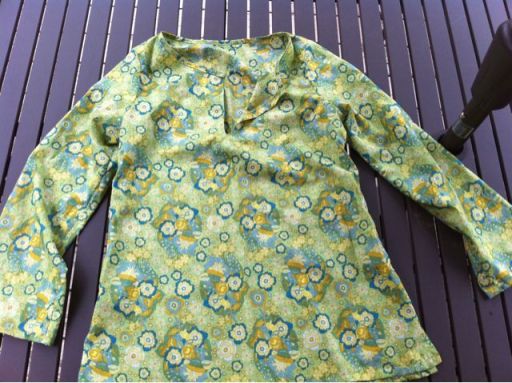 I finished the shearwater kaftan shirt that I feel like I have been making for ages!  I used Anna Maria Horner Little Folks voile fabric in Baby Bouquet.  This was the first time I had sewn voile.  It was fine but much less forgiving than the quilting cotton I am used to.  I made several mistakes while sewing this, but I had to keep repeating to myself something I read on the Badskirt blog: Not to fear, I have a seam ripper and I’m not afraid of it!  I really like how it turned out, but I’m afraid it is a tiny bit too small for me.  (I had wanted to get a photo of me wearing it, but I haven’t done that yet and John’s not here right now that will be forthcoming.)  I will happily make another one in a medium, but the annoying thing is with garment patterns you first have to trace the whole pattern in the size you want to make, then cut the fabric from what you traced.  I’m a little bummed that in order to make another one I have to retrace the pattern in the slightly larger size.  Not a big deal, just when I was tracing it the first time I was thinking next time I made it I would be going straight to cutting the fabric! 🙂  Impatient much?

I was inspired by my friend Faith to make this quick Oliver + S Lazy Days skirt. Like Faith, I altered it slightly by using fabric instead of ribbon on the hem. This was a very quick and easy project – I think it took me less than 2 hours start to finish (thank you, Layla, for taking such a good nap so Mommy could work on this while Daddy and Hayden are off boating in Bloomington!). I was happy that the skirt allowed me to use some fabric that I had had around forever trying to find the right thing to do with it. I love the Michael Miller Par Avion fabric that makes up the majority of this skirt, but I have had trouble matching it to other fabrics so haven’t gotten to use much of it. The bottom hem was scrap fabric from an Amy Butler Birdie Sling bag I had made for my mom earlier in the year.

The skirt is a present for one of Hayden’s playmates. She turns three on Monday and is having a party this week. I hope she likes it!

My friend Faith told me and our friend Stephanie about a “sew a long” where people sign up into an online community where over a specified period of time everyone made a dress from the same pattern.  The two hosts posted hints and tips over the time to help, and members could ask questions of the community along the way if they got stuck.  I decided it sounded like fun and joined.  I hadn’t made a garment from a pattern before so what a great time to try for the first time, when I had the support of nearly 300 people!  The pattern was for what was called the “ice cream dress” from Oliver + S.  I made this for Layla in size 12 – 18 months, so she should be able to fit into it when it gets warm next year.  I was hoping by then her growth will slow down some so she can fit into it for a longer period of time than she is fitting through her current clothes!

It was so fun making this dress, and I love the result.  Layla was not impressed when I was trying to work on it with her in the swing or on a quilt on the floor, so I found the best way to sew it was while wearing her in her baby carrier.  She falls asleep pretty quickly that way, and I could actually get a good stretch of sewing time without interruption (as Hayden was always napping, asleep for the night, or off somewhere with John).  The pattern comes with two dress variations and one blouse version, so I will definitely be doing those at some point.  At the moment I am working on this shirt for myself.  I started it a couple of weeks ago and have not been able to carve out much time for it.  It has buttonholes which is the first time I have done those, so I had to teach myself how to do that which took up some of the little time I have been able to devote to it.  Now that Layla has started taking naps in her crib, though, maybe I will have more time (although Hayden is not taking a nap every day now so maybe not!).

Hayden got a book out of the library called “Giant Dump Trucks.”  The first time he asked me to read it I hadn’t really processed the title and when we opened it and I saw the size of the dump trucks I was shocked and said, “Oh my gosh!”  Well, he was really thrilled about my reaction and every time he asked me to turn the page he wanted me to say “Oh my gosh!”  Over the next few days he kept getting out that book and as he turned each page he would say, “Mommy, please say ‘oh my gosh!'”  He would smile so big when he was bringing the book to me that I would know what book he was carrying before I could even see it.   The cutest part was how he would mouth the words as I said it.  You would be amazed, too, if you saw the size of these trucks! 😉  We took the book back last week, but he has moved on to other truck books where he wants me to say “oh my gosh.”

Layla is sleeping in her crib for the first time as I type this. She has been sleeping in our room at night in her pack n play basinett since she came home from the hospital. During the day she’s just been sleeping as we go – in the car, in her baby carrier, in my arms, etc. I hadn’t raised the crib mattress from when Hayden slept in there and wasn’t planning to get the mattress pad and sheets on it until then, so it wasn’t ready for her to go in it yet. Then yesterday I finally raised the mattress and washed the pad and sheets. I figured at the very least I would have a good place to lay her down when I was upstairs once I did that! Then a couple of hours ago the three of us were upstairs and she fell asleep while I was feeding her. I thought I would try out the crib and see how she got on. I swaddled her up, closed the shutters, and she’s been out like a light for 1 1/2 hours! I don’t think I am going to move her in there at night yet. She is still sleeping through the night, but it’s sooo nice to just take two steps to pick her up and feed her instead of walking down the hall, so I’m happy to give her a little longer in there.

I couldn’t resist taking a cheeky picture of her when I went in to check on her. 🙂

Layla on the Playmat

I got out the playmat we had for Hayden when he was a baby a couple of nights ago for Layla.  It was so cute watching her look at the toys hanging from it with amazement.  She was kicking her little legs and had her eyes and mouth wide open for the longest time.  She made some excited noises, too!  I had gotten it out when Hayden was asleep and we knew that he’d be all over it when she played on it when she was awake,  Sure enough, the next morning when he was up and I put Layla on it again he was right there next to her.  🙂  He was sweet though, making the music go for her and showing her the toys.

Next Page »
Hayden and Layla's Place
Blog at WordPress.com.