On our final day we took a catamaran to see the Napali coast.

On the way to the port, we stopped in a little shopping area to find some souvenirs and got this cute pic of the kids hanging ten. 🙂

We had beautiful weather, hardly a cloud in the sky, but the wind when we got out to 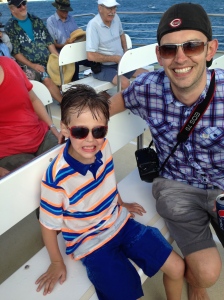 sea was outrageous.  After a while the waves were so rough that everyone who wasn’t in the sheltered lower deck was getting drenched.  The captain asked us if we wanted Layla to join him in his little sheltered area of the boat, so she and I did and as such escaped getting soaked, but John and Hayden stayed on the top deck and just got soaked.  Luckily Hayden had a great attitude about it, though.  The captain eventually determined we wouldn’t be able to make it all the way to the Napali coast as he knew the waves would get worse when we turned north, and there were people getting seasick as it was.  So we turned around and focused on finding whales.  We had already spotted one who was strangely motionless with his fin out of the water.  They guessed he was sleeping, but they said it was very 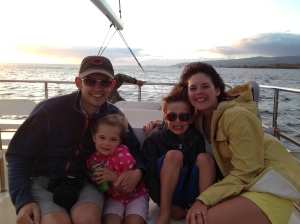 unusual.  We saw him again when we turned around, and we got close enough that he “woke up” or whatever happened to make him decide to swim off.  Apparently there were also dolphins who came close to the boat, but just for a split second – most of us didn’t see that.  And we saw a double rainbow which stuck around for a really long time.

Whale fin sticking out of the water, towards the horizon

The crew was really nice, and they provided plenty of drinks (our kids were pretty liberal with their soft drink consumption) and we had a nice sunset dinner on the boat.  The couple who was on our helicopter flight was also on this boat so it was nice to see them again.

All in all, it was a nice ride on the catamaran.  Shame we didn’t make it to the Napali coast, but we were lucky that we had seen it from the air in the helicopter.