Thursday we went on a helicopter ride!  It was very, very cool.  Luckily the winds had calmed right down – I don’t think I would have been very comfortable in strong winds.  The kids did 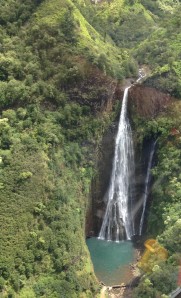 great – Layla wanted me to have my hand on her leg but that was all the reassurance she required.  She was very quiet though so I think she was apprehensive but being very brave.  She got so comfortable in the end though that she ended up falling asleep!!  Oh dear.  Hayden was in the front row with John so I wasn’t able to see him, but John said he was really excited.

It was a clear, gorgeous day so we had spectacular views.  We saw each area of the island

(i.e. north, south, etc), and the pilot told us some stories and facts about the island and pointed out areas of interest – many of them relating to the many films shot around the island.   For instance, the waterfall from Jurassic Park (pictured) and the beach from The Descendants.

We were a couple of minutes late for the helicopter check in because we spotted some whales when we were on our balcony before we left.  We tried to get a good pic but it’s really hard to capture them from shore without a fancy camera.  It is just so exciting to see the water spraying into the air and the occasional fin splashing out of the

water.  We could see there were about 3 or 4 traveling together (from what we hear, likely mom and calves).   So after the helicopter ride we came back to the condo, made some lunch and parked back out on the balcony to see if we could see more whales.  They weren’t around any longer, so we took the kids to the pool for a while.  John and I each took turns watching the kids while the other went to a spot nearby to watch the waves and turtles.  We’ve gotten good at spotting the huge turtles swimming around.  They really seem to do well in the rough areas that you would think would just bash them right into the rocks.

We had our rescheduled photo session in the afternoon.  It was fine, but it is just so breezy on the shore as well as so bright looking into 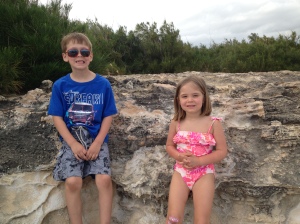 the sun that I am a bit weary about how they will turn out.  I’ll have to just try to suspend my judgement until I see the photos. 🙂

After photos we took a little hike around shipwreck beach.  We could see again some whales playing in the water – proper splashing around and seeming to have a “whale” of a time out there, so much fun to watch!  We also saw some more turtles showing off in the rough waves in a different part of the shore.  Hayden was loving

the hike as usual, but it was a sandy path and Layla just can’t deal with sand in her shoes.  So there was a lot of carrying her around and eventually I just told the boys to go on as far as they wanted and I took her back down to the beach.  While we were waiting we found this cute heart made out of stones.  I love the pic of Layla standing on it. 🙂

We had reservations at Keoki’s Paradise for dinner.  We had some more yummy Mai Tais (still not beating Merriman’s, though), calamari, fantastic bread, and John and I split our fish and seafood risotto meals.  The food was good – I think I ate too much appetizer and bread because it was hard to finish the meals, but it was good.  The couple at the table next to us had a drink that came in a pineapple, so we had fun watching that and eventually he gave the pineapple top to Hayden which was fun.